This letter petition aims at arousing Mr. CY Leung’s attention on the public’s concern Chinese language education for ethnic minorities. We appeal to your support to make a difference together.

Letter Campaign concluding petition:
From late June to mid October in 2013, we have sent over 300 petition letters to the Chief Executive Office and collected over 5000 public signatures, which shows the Hong Kong society's concern over education for ethnic minorities.

Link to media report on the petition (Chinese only) 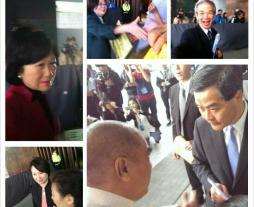