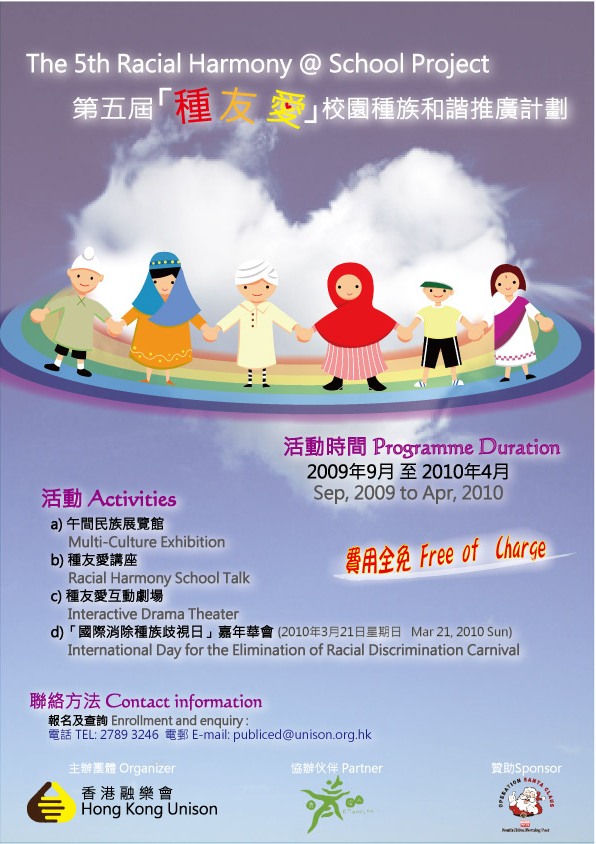 Since Sep 2004, the Education Bureau (EDB) adopted a new arrangement for the education of ethnic minority children. Under the new policy, these children could opt to study in mainstream primary school that help them integrate into the community earlier. However, new challenges were brought to schools such as structured Chinese language classes, adaptation of students, teachers and principals, and supportive resources. Besides, building a racial inclusive learning environment is another new issue.

Unison believes, the promotion of multi-culture education could reinforce the racial awareness and sensitivity. It also facilitates the acceptance among different races, and mutual appreciation with respect. In long term, it could benefit the Inclusive Education that align with the goal of EDB's new policy. In response to the new policy, we kicked off an innovative project in 2005, Racial Harmony @School to promote racial harmony message at school. It gave Chinese students' exposure to Ethnic Minorities culture in HK, which helped to promote greater cross-cultural understanding and create a racial inclusive environment in school.

Over the past 5 years, we witnessed the positive changes of students, teachers and principals at schools towards racial equality and harmony issues. Their concerns to ethnic minority students have also been increased, that was what we anticipated to see a harmonious picture around schools, neighborhoods, communities. The project has several program such as roving exhibitions, talks, and interactive drama, to promote the racial harmony more effectively, and expanded the coverage of the activities to public.